samaya4 serpom monastery14 death2
In 2014, news of the passing of one of the sacred living jewels of Serpom Monastery surfaced. He was Gen Tenzin Donyo, widely known...

In 2014, news of the passing of one of the sacred living jewels of Serpom Monastery surfaced. He was Gen Tenzin Donyo, widely known as Gen Ahzung. Outwardly, he was an ordinary, humble monk with simple practices and few possessions. The heart practice that he cultivated throughout his life was the recitation of the Praises to the 21 Taras. He was also very devoted to the practice of Dorje Shugden. On the 11th day of the first month of the Tibetan calendar, the 93-year-old Gen Tenzin Donyo passed away and remained in thukdam death meditation for the next 19 consecutive days. His heart had stopped but his body did not decay even in the intense southern Indian heat. On the 30th day of the same month, Gen Tenzin Donyo’s consciousness finally departed his body.

The monastery arranged a traditional cremation ceremony for Gen Tenzin Donyo. After the cremation, the remains were examined and rinsel relics were discovered. These are usually found amongst the cremation remains of High Lamas.

In Gen Tenzin Donyo’s case, although he was not a scholar-monk who meditated a lot, he was a pure practitioner with clean samaya with his Guru. Thus, the rinsel pills arose from his great attainments and are indicative of his high realisations. Collecting holy relics after the cremation

In order to activate the blessings of such holy pills, they can be burnt to dispel negative energies in a particular area or eaten to heal illnesses and diseases. The pills can also be placed in statues and stupas or worn on the body in amulet boxes for protection. Rinsel relics from the funeral pyre

In life, Gen Tenzin Donyo was one of the numerous working monks in the monastery. He was always ready to help with monastic affairs in whatever way he could. He was not known to engage in extensive sadhanas, practices, retreats or rituals. He was also not known to be particularly scholarly nor was he known to be a great teacher. However, he would diligently perform daily devotions to Tara without fail.

It is clear that from the power of keeping his samaya clean with his teacher, his yidam Tara and his Protector Dorje Shugden, Gen Tenzin Donyo achieved the attainment of controlling his death and his rebirth. And so, his life as well as his passing blesses us with inspiration. It is a great teaching that if we are sincere in our practice, we can gain great attainments even if we are not a scholar or great master; we just need to devote ourselves to our Lama, yidam and Protector Dorje Shugden. 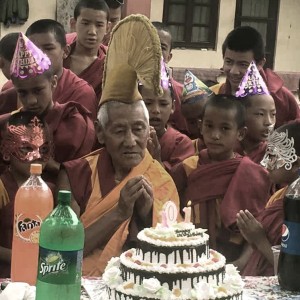