22 May 2016 marked the 90th birthday celebrations of the 101st Gaden Tripa, His Holiness Gaden Trisur Rinpoche Lungrik Namgyal. This event was organised by the people of Dhapa, Nepal and the members of Thar Deu Ling Buddhist Centre, Paris. The guests engaged in a grand long life offering ceremony (tenshug), primarily sponsored by the people of Dhapa, followed by Tibetan dances and other traditional celebrations.

The Gaden Tripa is the Holder of the Gaden Throne, considered to be the representative of Lama Tsongkhapa on Earth. This title is given to the spiritual leader of the Gelug school of Tibetan Buddhism, who is traditionally appointed in a hierarchical progression that is based on the merit of a monk’s learning, practice and adherence to the monastic vows and commitments. Therefore, an ordinary monk with no hereditary or incarnation status can ascend the ranks within the monastery to this highest position.

A new Gaden Tripa is appointed once every seven years and is alternately selected from the Sharpa Choje and Jangtse Choje. This appointment is automatic but is confirmed by His Holiness the Dalai Lama, who will publicly announce the appointment at the time of the changeover. The close relationship between these two great lamas is palpable 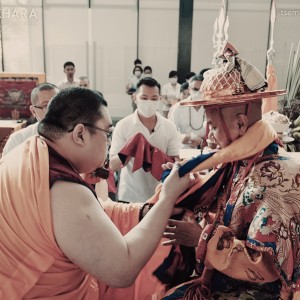